[Note: I started this post on Tuesday before Bil Keane died. Rest in Peace.]

When I 14 I was paperboy, which I loved, despite being up by 530am every morning. The positives- riding my bike and getting paid, getting paid (!), outweighed the negatives- always having to be around and always having to be up super early. It gave me an odd amount of time every morning before school which I used to read the paper, mostly the comics. Like everyone, Calvin and Hobbes and the Farside were my favorite (Have you seen the zine that organizes Calvin & Hobbes by political commentary PDF!?). Though I did read all of them including the Family Circus, which I never thought of as particularly funny or creative.  But it did leave me with something else. Occasionally the author would show the path that Billy (is it Billy?) had been on all day with dashed lines all over the neighborhood. I’ve always though about what my line looks like each day. And apparently I’m not the only one who thinks about this- The French sociologist Paul-Henry Chombart de Lauwe asked a grad student to keep track of her movements in Paris to see if people really take advantage of large cities.

But when I’m in Ocean Beach San Diego, I don’t need dashed lines or a sociological study to know what my route looks like.  I love this neighborhood: some of the best vegan food in the world is here. There, I said it. And here’s why:

The Ocean Beach People’s Organic Food Market is an all-vegetarian, member-owned cooperative that has been in this neighborhood since 1972. I love co-ops and always try and visit new ones when I’m traveling. But none have had what People’s has: A bangin  breakfast. Possibly the best vegan breakfast I have ever eaten outside of my own kitchen. Restaurant breakfasts are the Achilles Heal of veganism. Options are rare and when they exist it’s often meh tofu scramble. Not here.

The potatoes are real breakfast potatoes! Cut into bite size pieces and cooked until crispy with just the right amount of salt. The tofu scramble is good as are the tempeh sausages, but what wins the award is the vegan biscuits and gravy. VEGAN BISCUITS AND GRAVY FOR BREAKFAST! The biscuits are that perfect texture where they are flaky, yet filling. And the gravy is tasty and creamy yet not overly decadent for a breakfast meal. The best part? You can get a full plate and a cup of coffee for under $8. And the organic coffee is excellent! It’s a meal that I dream about. Famous vegan blogger Quarry Girl discovered People’s breakfast and also gave it rave reviews. Yes, it is worth a trip to San Diego.

Last Spring, when I rode LA to San Diego for the Mt Laguna Cycling Classic I txt’d my friend Stu to let him know we were close and super hungry. He responded that they were going to get burritos from the liquor store. What? And that was my introduction to Liticker’s Tacos. Sorry Quarry Girl, I agree with you about People’s breakfast, but the best vegan Mexican food in San Diego is not at Pokez, but in a liquor store on Voltaire St.

Have you ever ridden past a taco truck and thought, ‘why can’t vegan food like that exist?’ Now it does! The cooks at Liticker’s work magic with seitan, tempeh and tofu from TJ style tacos to California burritos with french fries. And everything I have ever eaten there is better than anything in Los Angeles or San Francisco. The seitan must be marinated and then grilled to perfection. It’s slightly salty, the way it should be and full of flavor. Even the tempeh has a flavor that I’ve never experienced. My non-vegan friend Mark said it best, ‘Finally it’s real Mexican food made vegan.’

My dashed line in Ocean Beach is often between the two above places, but on weekends I try and stop in at Stephanie’s Vegan Bakery, also on Voltaire.  I’ve written about Stephanie’s previously. What a street!  Does it really rival the Vegetarian Paradise 2-Bagels on the Square-Red Bamboo situation in Manhattan? Maybe so. 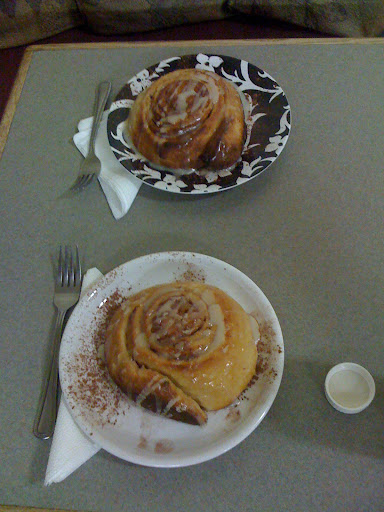 Around the corner from Voltaire is Rancho’s which has a hugely expanded vegan menu: tamales, quesadillas, mole, and a number of burrito fillings including carne asada. Vegan carne asada! This makes Pokez the third best place for vegan Mexican in San Diego. The carne asada burrito comes with meat, daiya, guacamole and salsa. I add rice and beans mostly just to keep the grease from running down my hand and onto my arm and to remind me that I am indeed eating a vegan burrito.  They also have a location in North Park on 30th St at University. I can’t seem to find my photos from Rancho’s so instead here are two spooning dogs I get to hang out with when I’m in Ocean Beach.

Want a ridiculous day of eating that no nutrition professional should ever recommend? Here it is:

The Co-op also has a vegan bakery. What a world.

8 responses to “Vegan in Ocean Beach, San Diego: The Best Breakfast AND the Best Mexican Food?”